The World Antimicrobial Awareness Week (WAAW) starts today, and this year’s slogan highlights the importance of encouraging best practices when it comes to using antimicrobials. Our portfolio company Resistell is helping to reduce the spreading of antibiotic resistance with their rapid Antimicrobial Susceptibility Testing.

The World Antimicrobial Awareness Week (WAAW) is a global action plan aiming to increase awareness and the understanding of global antimicrobial resistance (AMR) via effective communication, education, and training. One of the key objectives is to encourage best practices among the general public, health workers and policy makers to prevent drug-resistant infections from further emerging and spreading. Another key objective during this week will be to tackle the growing problem of resistance to antibiotics and other antimicrobial medicines.

We are very proud of our portfolio company Resistell, who is helping fight the problem of resistance to antibiotics with their rapid Antimicrobial Susceptibility Testing (AST) which determines which antibiotics a specific organism or group of organism are susceptible to.

According to WHO, antimicrobial resistance (AMR) occurs when bacteria, viruses, fungi, and parasites resist the effects of medications, making common infections more difficult to handle and increasing the risk of disease transmission, acute illness and even death. Antimicrobials include antibiotics, antivirals, antifungal, and antiparasitic medicines. They are commonly used to fight diseases in humans, but also in animals, and plants.

AMR is one of the biggest global health challenges today and it’s only getting worse. The emergence of multi-drug resistant pathogens has made it increasingly difficult to choose the right antibiotic for critically ill patients. As a result, physicians are frequently turning to broad-spectrum antibiotics and the excessive use of these powerful medicines triggers the development of multi-drug resistance. – Danuta Cichocka, CEO of Resistell

World Antimicrobial Awareness Week is celebrated annually from 18 to 24 of November every year since it was endorsed at the Sixty-eighth World Health Assembly in May 2015. Following a stakeholder’s meeting this May organized by the Food and Agriculture Organization of the United Nations (FAO), the World Organisation for Animal Health (OIE), and the World Health Organization (WHO) the scope of this global plan was expanded to all antimicrobials to facilitate a more inclusive global response and support the multisectoral One Health Approach. As we mentioned before, the slogan for the 2020 campaign is “Antimicrobials: handle with care” and it is applicable to all sectors.

Fortunately, around 10 years ago, Dr. Sandor Kasas and Prof. Giovanni Dietler from the Laboratory of Physics of Living Matter (LPMV) at EPFL embarked on developing a ground-breaking new AST method. Together with their team, they began testing Atomic Force Microscopy cantilevers as sensors to detect nano-scale vibrations of living cells.

“The EPFL team discovered that vibration of bacteria exposed to antibiotics cease and the difference between the level of vibrations before and after exposure to the drug can serve as a marker of antibiotic susceptibility or resistance. This removes the culturing step because the reaction can be observed before the bacterial cell doubles, thus, reducing the time-to-result from several hours to less than an hour. – Danuta Cichocka, CEO of Resistell

The potential impact of their discovery could change hospital practices forever, and that’s how Resistell was born. The scientists were aware of the long and challenging road ahead to bring such an innovation to market. Nowadays, Resistell’s life-saving device is based on that technology, and their rapid AST detects the movement caused by living bacterial cells and provides information not just on which antibiotic should be used to treat the patient, but also the concentration at which it should be administered. 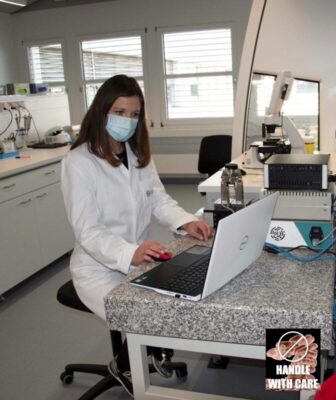 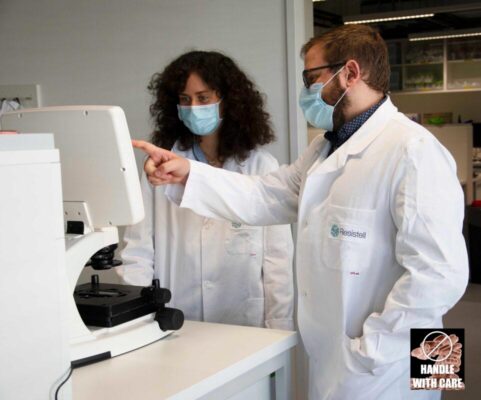 Apart from being in the Start-ups ecosystem hotspot – just this year they have won the Special Life Sciences Award at the Swiss Innovation Challenge and are among the top 10 best Start-ups in Switzerland. Resistell is now preparing for their clinical validation. They have recently moved into their new offices and brand-new laboratories on the 5th floor in Muttenz, where one part of the team works in their new engineering and microbiological laboratories. Here they are finishing up the last tests, so they can start their clinical study planned for Q1 of 2021. This clinical study will take place where their second part of the team is located, at the University Hospital in Lausanne (CHUV).

Resistell’s fundraising story is very impressive. They raised 4.4M in equity finance in seed and series A rounds, and 4M in non-dilutive from different grants, and that’s not surprising because with their work ethics and mission, Resistell envisions and advocates for an efficient and affordable healthcare system in the long-term.

At HEMEX we are very proud of where Resistell is now, we believe that AMR is one of the major challenges of our time and we want to thank Resistell for their fight in this serious threat to global public health!

HEMEX is committed to changing the future of healthcare by guiding the most promising European start-ups through each and every step to bring innovative pharmaceuticals, medical devices and in vitro diagnostics to the market. Headquartered close to the thriving Basel global Life Sciences hub, the goal at HEMEX is to ensure start-ups have access to a wide range of tailored products, practical solutions and fundraising support. This empowers the next generation of transformative discoveries to grow into successful and sustainable businesses, and drive change in both human and animal healthcare. For more information, visit https://hemex.ch/